I’m currently working on several projects, which anyone with the time and interest can feel free to join me in, listed below:

Wherever relevant, my work has source code, issue trackers and wikis on GitHub! 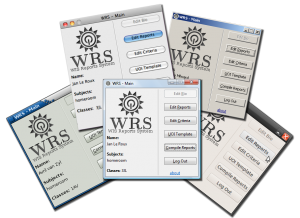 Formerly WRS, this program created school reports in PDF form for the Windhoek International School. I’m in the process of re-writing it as WORS, the WORS Optimised Reports System, an Eclipse RCP application written in Java and licensed under the Eclipse Public License. The source code, project wiki and issue tracker are now all on GitHub.